$500 Jeans, and other Trials and Tribulations of Dystopia 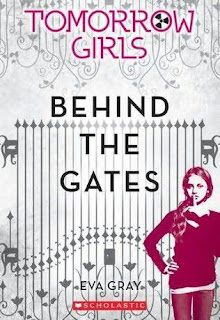 Our first introduction to the world of Tomorrow Girls, a dystopian series meant for those ‘not quite ready’ for YA dystopias, is this: that in this bleak and war-torn vision of the United States, jeans cost $500.

It takes us many more chapters before we learn that along with jeans, food is also a scarce commodity. That seems less pressing, though, to Louisa, the book’s protagonist. Indeed, that food isn’t available in abundance is almost a positive, as no one can be overweight in this future-world, a fact which Louisa notes with almost-satisfaction, as she reflects on her own slim figure.

That there is a market for dystopias for younger children points to the ever-growing popularity of the genre. Dystopian literature is indeed booming, and many authors are jumping onto the bandwagon. In these dystopias, violence, or implied violence, seems inevitable, as wars rage and the threat of larger violence looms. In thinking about this violence in literature for children, I have always tried to consider it alongside the messages that many of these dystopias seem to deliver: that violence is horrifying, that we must fight to stop this violence. While I am not by any means convinced that violence in these books is truly positive, I can at least see what authors seem to be pushing for: that by demonstrating the potential for destruction within these worlds, we demonstrate to children the kinds of worlds we want to avoid.

But what does it say when dystopia is employed as a trendy background? When scenarios of violence and destruction are used as an excuse for a narrative of high school drama and angst? For this is what Behind The Gates, the first book of the Tomorrow Girls series seems to be. In a dystopian world, dystopia itself seems almost incidental. Instead, the story focuses around the social interactions and social crises of a group of four friends at an elite all-girls boarding school, complete with the stereotypical fight between best friends, desire to be among the ‘cool kids’, and even an encounter with boys from the off-limits school across the lake.

Many of my frustrations with Tomorrow Girls seem to inevitably tie into gender. Here, a group of girls are put together in a school setting to be trained as the “future leaders of tomorrow”, told that they will be the ones to lead their ruined nation out of war and back into peace and prosperity. And yet, in what seems a glorified summer camp more than a school, their greatest knowledge of the dystopia they live in seems the cost of clothes, with disregard for any of the realities of their world, and indeed, a stunning disregard for their parents, left behind in warzones and ravaged cities.

Of course, I don’t mean to suggest that violence should be inserted into these books: that it is necessary for these characters to experience atrocity. However, I would argue that this disregard for the destructive world that the series constructs should trouble us, perhaps as much as the explicit violence we might see in other dystopian works like The Hunger Games or The Maze Runner. For what does it say about how we view violence, when said violence can go completely unremarked? And what are young girls to take from this when faced with this world, where the “future leaders of tomorrow” are those consumed by materiality and popularity, a world which seems to encourage readers to turn to boys and in-crowds in the face of social difficulty?

Clementine wrote a recent post on bad, but interesting, literature. And indeed, The Tomorrow Girls seems a prime example, bad but interesting, if not a little infuriating. For I must confess supreme frustration at a book which seems to use the dystopian genre as a vehicle to talk about boys and hair. To be fair, I have not yet finished the Tomorrow Girls series. Thus, despite my feelings about Behind the Gates, I must suspend my judgment of the series as a whole - for now. Who knows? Perhaps the characters will demonstrate a growing social awareness as the books progress. Perhaps they will realize that there is more to life than fitting in with the cool kids, especially when mass starvation looms. Unfortunately, the only prediction I feel prepared to offer is this: that Alonso will eventually ask Louisa out. Of course, nuclear war and famine might occur in the meantime. But, amidst all the possibilities that ‘Tomorrow’ might bring, of that at least, I can be certain.